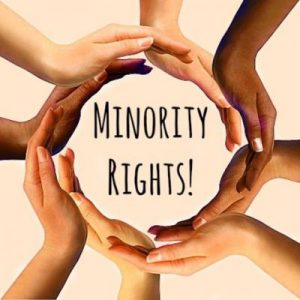 Religious Minorities and their Rights in Pakistan

Pakistan, as an “Islamic Republic”, has an overwhelming Muslim majority. Minorities in Pakistan make up a very small proportion of the overall population. Hence, about 96% of the people practice Islam, whereas around 4% practice other religions, with Hinduism and Christianity being the prominent minority religions, in Pakistan[i]. These figures are self-reflective of the fact that minorities naturally have a limited say in social and state affairs. Moreover, the constitution of Pakistan also prohibits any minority member from holding the highest state positions of President and Prime Minister[ii]. In 2012, Freedom House termed Pakistan as partially free in terms of religious independence, whereas Pakistan ranked the third-worst state, according to Foreign Policy magazine, in terms of a group grievance in 2014. The United States Commission for International Religious Freedom (USCIRF), in its 2020 annual report, also recommended that Pakistan should remain in the list of countries of particular concern (CPC) in terms of religious freedom. Other countries recommended for CPC in the report included Burma, China, Eritrea, India, Iran, Nigeria, North Korea, Russia, Saudi Arabia, Syria, Tajikistan, Turkmenistan and Vietnam.

Minorities in Pakistan also faced threats of persecution, forced conversions along with religious violence. In recent years, especially since the US invasion of Afghanistan in 2001 and the rise of religious extremism in Pakistan, right-wing militant groups have targeted members of the minority communities; including Shias, Hazaras, Christians, Hindus, Ahmadiyya and the Ismaili community. This situation does not only stem from the narrative built by radical Islamic groups but is also compounded by the state constitution that is responsible for structural prejudice against the minority groups.

In terms of religious freedom and practice, Pakistan’s history concerning religious minorities is somewhat complex. Although Pakistan was established on the principle of “secularism” by its founder Muhammad Ali Jinnah promising freedom of religion to everyone, the revisions and constitutional changes, motivated by right-wing religious groups, in the 1970s and 1980s marginalised the minorities in the country[iii]. This is where two schools of thought exist in Pakistan; the liberal and the conservative. The liberal school believes that Pakistan was founded on identity agonistic principles with equal citizenship for all, whereas the conservative narrative says that the country was founded only to protect and practice Islam[iv].

The first blow to Jinnah’s version of secular Pakistan came when in 1962 the Pakistan Advisory Council for Islamic Ideology added a repugnancy clause to the constitution stating that all the laws should be brought in conformity with the Holy Quran and Sunnah. Pakistan’s official name did not include the Islamic Republic until the 1956 constitution was formed, and Islam was not officially designated a state religion until it was stated in the constitution of 1973[v]. The constitution of Pakistan, on the other hand, also tried to ensure religious freedom from everyone, as per Jinnah’s vision.

Article 20 of the Pakistani constitution states that every Pakistani citizen must have the liberty to practice their religion and establish religious institutions. Yet, on the other hand, the same constitution forbids any minority citizen from holding the offices of President and Prime Minister in the country. Furthermore, the constitution explicitly states that all laws shall be formed in light of Islamic principles. It was General Zia, who, during his authoritarian regime, followed policies of Islamisation to enter into alliances with religious parties and groups, and thus introduced strict penalties and punishments for blasphemy offences through articles 295-298 of the Pakistan Penal Code. According to the section 295 of Pakistan Penal Code, any act of defiling or damaging a place of worship, or insulting Islam and the Prophets, comes under blasphemy and is punishable by a fine or a death sentence.

Article 295 A B and C encapsulate the clauses that are meant to protect Islam. The anti-blasphemy law has been misused in several cases. In one such case, a Christian Pakistani woman named Aasia Bibi was sentenced to death after being convicted of committing blasphemy. Salman Taseer, the then governor of Punjab province, was shot dead by his bodyguard on January 11, 2011, for supporting Aasia and criticising how the blasphemy law was practised in the country. Committing blasphemy is considered a serious offence in Pakistan, especially when it is allegedly committed by the non-Muslim community. In 2010, a whole block of the Christian community, comprising of 50 houses, was set on fire killing 7 and injuring 18, when the victims were accused of blasphemy.

Pakistan’s post-2011 wave of Talibanization has presented a major threat to minorities in the country. Although most of the Pakistanis have become victims to terror-related attacks, the religious minorities, especially Ahmadis, Shias, Christians, and Hazaras have come under religion-related attacks from fundamentalist groups[vi].  Lashkar e Jhangvi (LeJ), a banned militant outfit, is mostly responsible for attacks on Shias at large whereas Jundullah has been involved in attacks on Hazara Shias, especially in the Balochistan province.

The Movement for Solidarity and Peace, in its report in 2014, argues that “forced conversions” were one of the three major grievances that the minority community faced in Pakistan[vii]. The dilemma of forced conversions is prominent in the Sindh province of Pakistan, which constitutes the majority of the Hindu population living in the country. According to Human Rights Watch, 20-25 incidents of kidnapping and forced conversions of Hindus take place per month on an average in the province. The Christians, on the other hand, face forced conversions and marriages in Punjab province. In many cases, the girls forced to convert and marry are minors and thus are unable to provide consent and subject to physical and psychological abuse. Local police and administration are also accused of being complicit in many of these forced conversions. In the majority of these cases, the police, under the influence of local elites, fail to register the FIR (first information report) against the perpetrator and thus create the first and major hurdle for the victims and their families.

The cases and the current situation discussed above highlight Pakistan’s failure in protecting its minority citizens. This failure put the country’s already deteriorating international image at stake. Furthermore, minority groups in Pakistan have a legitimate concern towards the discriminatory laws against them in the constitution. These concerns have led to a mass exodus of Ahmadis, Hazaras and Hindus from Pakistan. In addition to that, radical individuals and groups have also been able to successfully eliminate voices of reason, such as former Governor Salman Taseer and former minorities minister Shahbaz Bhatti.

On the back of successful counter-terrorism operations in the former-FATA (Federally Administered Tribal Areas), Pakistan is now standing at an important juncture of its history. If the country fails in addressing the grievances of its marginalised minority groups, it would further marginalise the country’s minority groups. The government needs to ensure that Article 20 of the constitution is implemented in its true spirit and the minorities are provided not only with security but also full rights to practice their religion. Also, the country needs to formulate strict laws that punish those involved in forced conversions of minority groups. Only then can Pakistan succeed in establishing a safe space for minorities to practice their religion without the fear of persecution.

[i] Agency, C. I. (2015, May 1). Pakistan. In the world factbook. Retrieved from Central Intelligence Agency: https://www.cia.gov/library/publications/the-world-factbook/ geos/pk.html

[iii] Refugees, U. N. (2012, May 14). UNHCR eligibility guidelines for assessing the international protection needs of members of religious minorities from Pakistan. Retrieved from Ref World: http://www.refworld.org/pdfid/4fb0ec662.pdf